Following Gibshots first black belt success since we formed back in September 2016 with Nick Cruz it was student number 2’s turn to test his mettle. Paul Crudgington and I headed for Portsmouth Thursday the 2nd

February for training and his shodan examination on the Isle of Wight on the Sunday..
As is usual after our arrival we travelled with Sensei Mick Dewey (8th dan) to Hombu dojo also known as Portsmouth Karate Club for the first of the training sessions, as always it was great to see Sensei Stacey Crowe and my old mucker Graham Rowley also there. In fact I had asked Graham to warm up with Paul by way of a small gift from me. It didn’t disappoint, Graham is a right handful and the odd smack in the ‘nads reminded Paul this exam wasn’t going to be easy on Sunday.

On the Friday we were collected by Sensei Brian Smith (7th dan) Lovedean Karate Club and taken to his dojo for our second session. As always we were welcomed by all the students we knew especially Steve Periera who actually hails from Gibraltar but lives in the area. I was paired up mainly with Frog who it is always good to train with though my forearms are never happy lol.

Sunday morning we headed for the Wightlink ferry for the training and examination in Newport at the Medina Sports centre. Training started at 10.30 and ran through to 1.50pm with a couple of water breaks in it so a good 3 hours trai 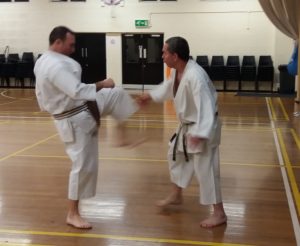 ning. Sensei Dewey taking the first part, Sensei Smith the second and the third was split  between them. I won’t talk about the training because some of the techniques are secret and dangerous so you’d best get on a course if you want to learn 🙂

Finally the exam came and as everyone else was finished Paul and others went through their paces for about another hour. We then went though an agonising wait before Paul came out to tell me he’d passed with a shiner to prove it! Brilliant.

I’d like to thank Sensei Dewey and Sensei Smith for letting us visit their dojo’s in preparation for the course also all the students at each dojo for making it a great training experience away from him. Ossu.

Sensei Dewey is back in Gibraltar at the end of March/early April so if anyone want to experience his teaching in person please contact me via email sensei@gibshot.com

If there are any ladies/men interested in a short self defence course then please contact me on the same email and I’ll make it happen.