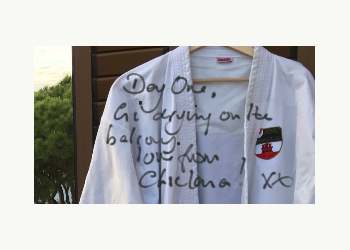 The year goes round so quickly so here I am once again stood in front of Sensei Naka (or Naka shihan as they call him here) and another 4 days of JKA teaching. The course here in Chiclana, at the southern tip of Spain a stone’s throw from Cadiz is really worth doing. What’s not to like as the sun shines, the sea is warm enough..ish to dip in or maybe your hotel pool will do the trick. The evening is spent in what really is a holiday resort but not so crazy as the Magaluf’s, Torremolinos or Costa Brava.

We await his arrival in the dojo as usual most of us saying hello to friends from previous courses some just looking mean and warming up all the while you know they’re out of their comfort zone.

The usual Naka 90 minutes for the brown and black belts, mainly black as this really is an instructor type class with emphasis on what we are covering over the main three days to follow. In fairness it’s starts to hurt around 10 minutes in as the quads from most instructors get a work out they rarely get and all we are doing is oi tsuki, gyaku tsuki …. well; to begin with. If you have never trained with him his revelation is what some call the double hip twist. Which is exactly what it looks like but if you work with it long enough it actually isn’t that because Naka has a mission. That mission is hips, core muscle control and using body axis points that make motion positive not negative and faster without strength. Sound complicated? That’s what development feels like… until you see it working. No doubt I’ll write more about it over the next three days.

The lesson moved from that into oi tzuki, mae geri, gyaku tzuki. Then onto oi tzuki, gyaku tzuki, suriashi kezami tzuki. This was all then added to the kata haian shodan which was fun if you like knots. Naka’s tendency to add to basic kata is nothing new, my Sensei Mick Dewey has often had course attendants scratching their bonce as the simplest of kata are turned into a spaghetti of legs and twisting heads using just kihon as the base paint.

Following that we tentatively touched (about 8 times) Sochin kata but using zenkutzu dachi stance to help with the hip exercise I mentioned earlier. I was pleased to see some of those warm up macho boys looking around for clues when the kata was underway. We finished that off with the kata as it should be performed with the correct stance, helpful for those of us that were tired and our brains seem to be turning to fudge.

After another 2 minute water break we were back talking or rather listening to Naka sensei sum up the class and the next few days, ably translated into spanish by his interpreter and into english by Akita sensei over from Germany. I first met him proper three years ago when I reminded him of his time when he was right hand boy to Kawasoe sensei in Shepards Bush. We never met then but we had stepped on the same boards. A different style to Naka but always in front doing it like the rest of us.

We ended with what I think is his favourite kata Haian Nidan. This is my fourth year and we do it everytime which is fine by me it is one of my favourites too. It links as everything does to body axis’ and the sense of budo Naka is trying to promote in how techniques are used. In essence, faster, more powerful using not strength but technique just like we were always taught but can never seem to grasp until we get on courses like this or listen more clearly to our own sensei.  More from me later.