This past Sunday I connected a visit to UK with the B&B course in Portsmouth catching up with SEKU members old and new. As always a friendly outfit headed by Sensei Mick Dewey 8th dan, my instructor since 1991. The instruction was ably assisted by Sensei Brian Smith 7th dan who has been part of my development on courses since the mid 90’s and like Sensei Dewey someone I consider a friend. 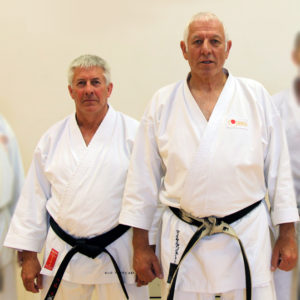 This course concentrated in the main (2 hours) on kata Enpi (Empi) both are correct spelling of the name and I’ve no idea how they both started. The kata was originally call Wanshu so go figure. Either way we worked through it including plenty of bunkai (application) with those of us less mobile limiting the jump to just a few efforts, in my case about 7 after which I considered myself practised.

The final hour saw Sensei Brian move into kihon ippon/ju ippon territory which is often a great exercise both aerobically and practically. In other words in the end you are both knackered and bruised, worse if you loose your focus and one gets through. We also touched on some randori to warm down which is funny watching some of us using more oxygen than previously.

So after an energy packed 3 and a bit hours we bomburst our separate ways and suitably energised headed home. As always great to see everyone both SEKU & non – SEKU thankfully we have a Chief Instructor in Sensei Dewey that has genuinely been there and done it thereby attracting students from far and wide. It is too often we get complacent and forget the talent we have in front of us every week. All my karate days I’ve sat and listened afterwards to students waxing lyrical about this instructor or that one and no doubt in some cases they are worth the fee. I’d like to make you think on this. You wouldn’t be able to cope on these or any courses if the instructor, male OR female that spent those hours every week with you hadn’t passed on their knowledge. Many find it easy to be critical, few are grateful even less are loyal.